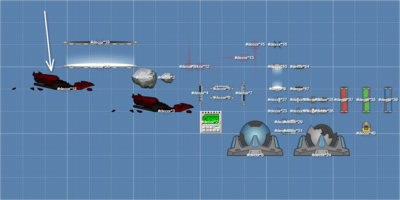 Decorations are simple, typically non-interactive objects that can be found throughout the Plazma Burst 2 Campaign and custom maps. Decorations can easily be placed inside maps via the decoration tool. This is one of the basic tools, described in the Old Level Editor manual.

A decoration does not add any aspect of gameplay into a map, but simply serves as mere artwork to make the scenery more in-depth. The default decoration is the stone. There is a parameter for each model of decoration. Decorations vary in size in shape, ranging from large destroyed ships, to small stones, to body-sized teleport devices.

This is a list of all decorations and their descriptions. Some decoration models aren't significant enough for their own section and have been combined with another, similar decoration. For a more basic list with each decoration's ID code, visit the old Map Editor manual page.

This is the default decoration tool. It consists of a large rock/stone type object, grey in color. There is a large version of the two stone decorations, dubbed the 'stone', and a smaller decoration, called the 'small stone'. Although the stone is non-interactive and 'covers' the player or entity that walks into it, a hitbox consisting of an invisible door can be added to the stone to make it seem like an actual hard rock. The small stone decoration is similar in shape and proportion to the stone, but is much smaller. The small stone is used in tighter locations where more stone decorations can be put, typically to avoid tackiness. Both types of the stone are fairly rare in the campaign, but in many instances, common in player-made maps.

This decoration consists of a broken, crashed Falkonian Ship. There are a few instances in the campaign in which the broken ship is used, usually to indicate the presence of the Falkoks or to tie the heroes in Plazma Burst 2 to the previous game. This is one of the larger decorations. There is a similar decoration, the incoming ship once animation.

This decoration features a Falkonian Ship that flies a short distance and then crashes into the ground, producing an interactive and somewhat damaging explosion. This decoration marks only the area that the ship will land. After a few seconds, the decoration will send the ship crashing down into the specified area. The incoming ship is activated on the start; for it to be delayed, a nothing decoration must be converted using the decoration trigger.

This feature is identical to the teleport in shape and size. It comes in two decorations as well, a ceiling decoration and a floor decoration. The only difference is its color. Instead of giving off a white glow color, the disabled teleport is a dark color and doesn't give off a glowing effect. This can be used to show that the teleport is disabled and cannot be used, even though the decorations themselves cannot perform the teleporting operation. This decoration is fairly rare in the campaign and custom maps.

The killing rays are a series of decorations consists of long, red laser beams. The killing ray is typically used as an instant-kill projection, usually for blocking off areas that a player should not be able to access. There are four kinds of killing ray decorations, identical with the exception of the direction they are facing. These include the right, left, floor, and ceiling kill rays. The killing ray decoration itself cannot kill players upon contact and is not interactive. A thin region with a very high amount of damage must be played over the decoration to get the instant-death and cutting-in-half effect.

Decorations that resemble lamps. Enabled versions emit light. Created by darkstar 1, and added to the game as part of update 1.28.

Lamps with similar design to the previously mentioned wall lamps, except for the fact that they are designed to appear to be attached to the background rather than walls. Also created by darkstar 1 and added in update 1.28.

A machine with unknown purposes that has a normal and destroyed version. Also created by darkstar 1 and added in update 1.28.

Columns made from radioactive fuel rods.[1] Created by DoomWrath and added in update 1.28.

Mined barrel, also known as the CS-IED, is a Civil Security manufactured improvised explosive device.[2] Also created by DoomWrath and added in update 1.28.

A door that can be opened with a more complex trigger system than normal doors. It was added as part of the Star Defenders update.

An image of Hakase from the anime/manga Nichijou. Unlike other decorations, this decor is secret and therefore hidden.

As of Version 1.32, custom images and sprites can be uploaded and approved for use as decorations in custom maps.

This decoration does nothing. In the Advanced Level Editor, it is represented by a black X. The nothing decoration is typically used to show the effect of appearing and disappearing decorations.

Retrieved from "https://plazmaburst.miraheze.org/w/index.php?title=Decorations&oldid=6301"
Category:
Cookies help us deliver our services. By using our services, you agree to our use of cookies.