In Plazma Burst 2, tactics in multiplayer are essential, as they help players survive and have have a better K/D ratio. 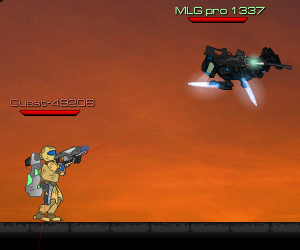 The process of this strategy is to lunge at your opponent while flipping, and slash them with your PSI Blades as you flip over them. This should decapitate them and kill them instantly. If you can pull off a full flip with this trick, your slashing will at least severely injure your enemy as well as possibly removing vital limbs. This tactic is extremely useful in sword battles with players. Unfortunately, if you misjudge the timings, your whole body will be left open to attack, and your victim becomes your executioner.

Camping is a simple and common tactic. Camping can involve using a high penetration weapon to shoot through walls that other players cannot, keeping the camping player free from harm, while being able to deal damage to opponents. Alternatively, simply holding the area with a fairly fast firing weapon, like an assault rifle, can be equally effective.

To do this, a player with a powerful/fast weapon must sit in a protected area, where they will be much safer than other players. The camper then waits or fires in that spot until a player is spotted and killed. Camping is good for surveying the map and for calling out enemy positions. 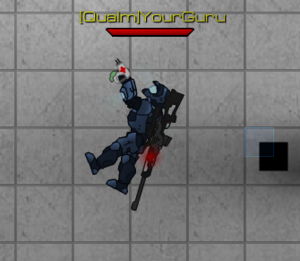 Selfboost is one of the most common tactics players take advantage of. Players can use Selfboost when they switch to PSI Blades. In order to Selfboost, a player must start to run, jump and then press and hold X in midair. Once this is done, clicking rapidly with PSI Blades in the direction a player wishes to go will allow the player to Selfboost.

Note: Due to some updates, weapons can no longer assist in normal gravity selfboosts, though it is still possible with the Defibrillator.

Using X to lie prone is a useful tactic that can allow a player to dodge projectiles, or shoot at a different angle than what they could shoot at by simply crouching.

This technique generally involves railguns, and is the process of a projectile bouncing or skipping off a surface at an angle. This technique is very useful for shooting players that are behind cover. In order to do this technique, the player must aim down straight at a wall, ceiling, or floor, with an angle and then fire. This will cause the projectile of the railgun or other weapon to bounce off the ground or wall, and then return to an area. Obviously, at different angles, the player can get different patterns of the projectile. Be careful when using this tactic, as it may cause a suicide if it is fired incorrectly, in the case of railguns. Ricochets with other weapons are generally not as effective, but can still be used against players in a similar manner. Some weapons cannot ricochet, like most explosive and energy weapons.

This is a simple tactic. The necessary items for this tactic would be the Alien Rifle and the Alien Shotgun. A player can quickly switch between the two weapons, firing rapidly. This can also be done with the Assault Rifle C-01r and the Shotgun C-01s, as well as many other weapons which will make a rapid-fire effect. In general, switching slots between multiple single shot or otherwise high damage weapons can be effective, firing them off one after the other in rapid succession.

Water skimming is the tactic of moving across large bodies of water at high speeds. To achieve this, you must selfboost at where the water and air meets. This propels you forwards at high speeds and is useful for getting to the other side of the water quickly or dodging attacks from enemies.

Retrieved from "https://plazmaburst.miraheze.org/w/index.php?title=Multiplayer_Tactics&oldid=5142"
Category:
Cookies help us deliver our services. By using our services, you agree to our use of cookies.